iShadow Desktop is designed to aid computer users with access to remote computers via multiple protocols supporting ICA, RDP and RFB (aka VNC) protocols. Remote Control (aka “shadowing”) is also supported when used in tandem with iShadow Application Suite. Shadowing is supported for both RDP and ICA protocols.

iShadow Desktop anticipates multi-session connectivity and is designed around a concept of “Favorites” similar to the familiar interface found with most Web Browsers. With this approach users can configure shortcuts with different authentication and/or connection parameters to the same or different target machine, connect via the same shortcut once or open multiple connections with the same configuration and target.

Special care is taken to protect user credentials and configuration which is 256-bit encrypted and can be optionally protected (highly recommended) with a user selectable PIN.

Before running installation please review the following prerequisites regarding supported operating systems. Application was developed and tested in x86 and x64 environments.

iShadow Desktop is a Unicode capable application and was tested on a variety of localized version of Windows. Although at this time user interface is available in English translation only, this application was successfully tested on German, French, Dutch, Portuguese and Russian versions of Windows. Teknica Software Inc. is currently working on several translations of iShadow Desktop interfaces and anticipates support of multiple languages in the near future. 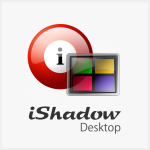